10 Reasons Why So Many People Fail In Sales 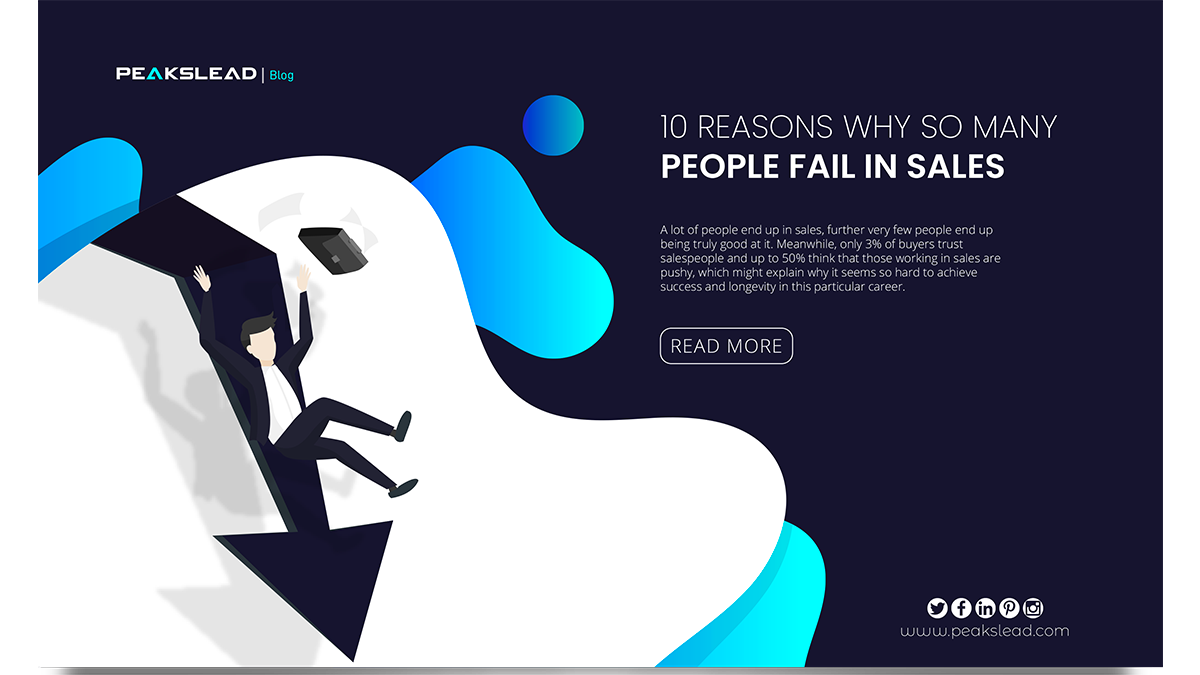 A lot of people end up in sales, further very few people end up being truly good at it. Meanwhile, only 3% of buyers trust salespeople and up to 50% think that those working in sales are pushy, which might explain why it seems so hard to achieve success and longevity in this particular career.

So why is it that this is such a tricky talent to master? Perhaps the first hurdle to overcome is thinking that it’s easy.

Thinking it’s going to be a breeze

Sales are anything but easy! Therefore isn’t simply names and telephone numbers on a spreadsheet. To be a good salesperson requires that you:

Certainly, it’s true that all newcomers should be given adequate training to feel confident jumping on that first call, a true sales professional understands that it’s as much about what he or she puts into it. Do you prepare to study in your own time to bolster your product knowledge? Are you finessing your own scripts and creating personal templates? Do networking to build contacts? And are you prepared to keep developing your knowledge, long after you’ve left the training room? Putting in the effort to refine the sales craft is as, if not more, important than any training tool a company can provide.

No mental investment in the profession

A lot of people fall into sales as a means to an end. And if a salesperson only ever sees their job as a ‘stand-by’ until something better comes along, they’ll never attain the level of passion that’s needed to be truly good at it. This is, perhaps, a dubious analogy but—for his many faults—Jordan Belfont (Wolf of Wall Street) was nothing if not passionate about his role.

I addition as Yoda says in the film The Empire Strikes Back, “Do or do not. There is no try.” People that are just giving sales a “bash” as they don’t have any other ideas about what to don’t go “all in”, as poker players say. And that’s where they fail, right at the beginning!

Trying to ‘wing it’

Without a clearly defined process, results will be hit and miss. The top 1% of salespeople adopt a singular, methodical, approach to each and every customer interaction; based on those elements of their pitch that consistently deliver good results. It comes back to self-development and to tweaking and finessing scripts and templates. There’s never an opportunity to rest on one’s laurels.

Failing to track and learn from mistakes

We’re all guilty of wishing our failures away and focusing, instead, on our successes. And there’s nothing wrong with doing well! But it’s just as important to acknowledge when something didn’t go to plan so that we can determine why and be sure to avoid repeating it. Embrace each mistake as a method of learning.

No two prospects are the same. And a mistake that a lot of salespeople make is failing to recognize that. A lot of time is wasted on prospects with zero intention of buying because of failure to scope out a few simple things, such as; what’s the customer’s financial capacity? What are their motivations? And who ultimately makes the purchase decision? A good salesperson will quickly find out a good deal about their potential customers.

Many people assume that if a sales pitch isn’t rounded off on direct ask: ‘So shall we go ahead then?’ the sale is lost. In actual fact, a trial close can be a far more effective tool in establishing your prospect’s trust and, ultimately, the sale. It asks, instead, for their opinion or feelings on what you’ve discussed, for example:

How do you feel about what we’ve discussed today?
Based on what we’ve talked about, are there any questions that you’d like to ask?
What, for you, are the next steps?

Consumers are ever-wary of being duped into buying something they don’t need. So a trial close puts the power back in their hands and allows them to feel comfortable and unpressured in their decision making.

Leaving the close until the very end

A sales pitch doesn’t follow a traditional story format. It doesn’t start with the introduction, proceed with the company/product blurb and its benefits, and end with; “So would you like to buy it?”. Moreover, those at the top of their game will begin the closing process the second a prospect picks up the phone. The entire call will be a (subtle) close, with the salesperson giving closing cues up to thirty times throughout.

Many assume that if a prospect isn’t returning their calls or emails, they conclusively do not want to purchase their product or service. In reality, a lot of prospects—particularly those in the B2B arena—are so busy that they simply forget to respond. One successful salesperson describes this key oversight for Forbes; ‘The failure is that many salespeople simply stop following up. They only stay on the hot opportunities that are getting back to them quickly. I never stop following up until I get a definitive ‘no, I do not want to buy your product because of X reason.

Missing out on quality coaching

Meanwhile, good coaching has been proven to boost sales performance by almost 20%, so it’s surprising how many companies fail to take ownership of this crucial development pathway. Further, the best training isn’t about ticking off a list of points covered, like a syllabus. It’s about driving engagement through active listening and encouraging regular conversation through questioning and debate. This, supported quantitative data, is the key to developing and maintaining those key skills needed to sell well.

Get in the driver’s seat and Connect with potential customers with PeaksLead.